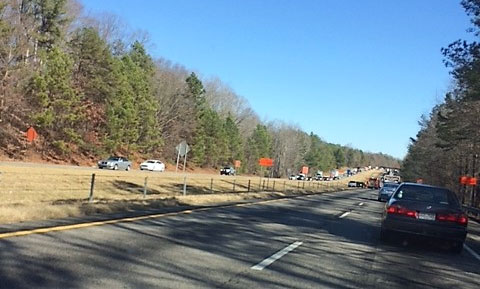 TUKWILA, Wash. — Many of us are guilty of it. You see a crash and you can’t look away.

“I think it’s innate that people want to see what’s happening,” driver Taylor Chaffee said Wednesday. That curiosity causing some dangerous situations for first responders. “One we had yesterday, some guy had his knee up on the steering wheel, driving his car (while) he was leaning out with his cellphone,” Tukwila police spokesperson Victor Masters said. That driver trying to take a photo almost veered into the crash site on Interurban Avenue on Tuesday.

But nosy drivers rubbernecking isn’t the only problem emergency crews are dealing with at accident scenes. “There was a lot of honking, yelling a lot of frustrated drivers, one lady actually made the point of stopping her car,” Masters said. That was Monday’s crash on Strander and West Valley Highway. Police say a woman frustrated with the road closures yelled at first responders trying to save a person’s life. “It’s completely narcissistic and messed up. You shouldn’t be that way, people should have more compassion,” Chaffee said.

Tukwila police say the frustration is natural but they are asking the public for more understanding. The police took to social media to try to convey the importance of their blocking off a serious accident scene. “If it was your family member for instance, we want to make sure we do the best job we can do; if they do unfortunately pass away, there is some type of closure there,” Masters said. Police say crashes involving serious injuries like the two from this week take hours to clean up because they have to first treat them like a crime scene.

“We have to map out the scene, have to have our investigators come out and actually do a very thorough investigation ,” Masters said.